SEOUL/NIIGATA, Japan — NiziU has been creating all the buzz in Japan’s pop culture scene this year, even before its full-fledged debut on Wednesday. The Japanese all-girl group’s meteoric rise to stardom has been driven by the tried-and-true South Korean formula for producing idol groups.

NiziU is a product of the highly efficient talent development strategy used widely in South Korea, which has cranked out a galaxy of K-pop idol groups, including Bigbang, Girls’ Generation and BTS. JYP Entertainment, one of the leading South Korean entertainment agencies, selected NiziU members through auditions and trained them in singing, dancing and other skills required to become international pop stars.

The process of selecting and training the members through the survival reality show “Nizi Project” was streamed online, helping to make the group as popular as any other Japanese all-female band even before its debut single was released.

The strategy has been so successful as to persuade Sony Music Entertainment (Japan) to team up with the South Korean agency for the project. It can serve as a powerful catalyst for change in Japan’s pop music industry.

NiziU has lit up the entertainment scene in these challenging times as the industry was engulfed by the darkness of the coronavirus pandemic.

A NiziU fan has her picture taken before life-size props of group members at a music store in Tokyo on Dec. 1, a day before the group’s debut CD hit the market.

The group has been chosen for advertisements for such major brands as Lawson, Lotte and Coca-Cola, and its group name was nominated for U-Can’s most trendy new word of 2020.

NiziU’s pre-debut song, released at the end of June, became an instant hit, with its YouTube music video already viewed more than 170 million times. On Nov. 16, NHK, Japan’s national public broadcaster, announced that the group will perform in the “Kohaku Uta Gassen” (“Red and White Song Battle”), the biggest end-of-the-year TV show in Japan. It is unprecedented for NHK to include in the event any singer or group whose debut CD has not been released yet.

The series of auditions to select the nine NiziU members, jointly organized by Sony Music Entertainment and JYP Entertainment, were aired by Nippon Television Network and its affiliated local stations, helping expand the group’s fan base to a wide range of generations.

Shunsuke Fujiwara, a 33-year-old in Tokyo, said he got hooked on the group while working from home. “I was drawn into the coming-of-age story of ordinary girls and their refined, high-quality performance of the K-pop standards.” Meanwhile, a 40-something woman in Niigata spoke enthusiastically about how she “felt as if the girls were my daughters” while watching the auditions.

A typical development strategy for a K-pop band includes a carefully calculated plan to boost its name recognition before its debut. This strategy has worked well for NiziU. After the process of member selection was streamed to attract attention, a catchy pre-debut song was released to create a wave of interest in the group. The song quickly caught on among junior and senior high school students, prompting many of them to learn NiziU dance routines and upload videos of their own NiziU dance performances onto Twitter and TikTok. 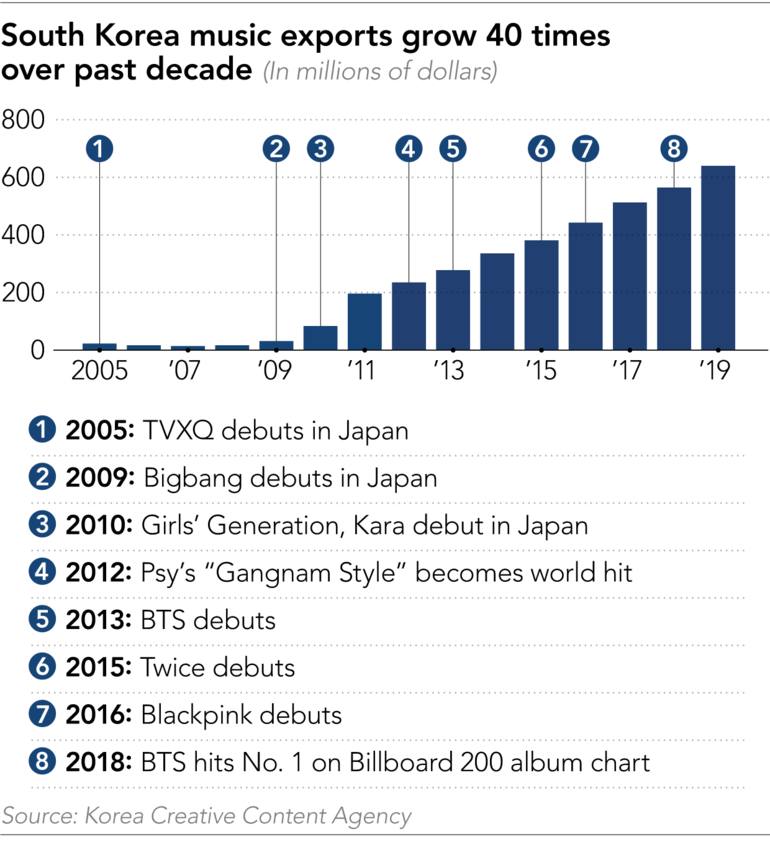 The NiziU team has used the “South Korean-style marketing approach, but the kind of coming-of-age story about idols that is popular in Japan has also been incorporated into the strategy,” said Hidetomi Tanaka, a professor at Jobu University and an expert on pop star culture. “This combination is something new.”

While members of J-pop all-girl groups like AKB48 and its sister groups have been promoted as idols who need encouragement from fans as they continue their efforts to improve their singing and dancing skills, the promotional narrative for NiziU is more focused on the story of how girls next door become stars, according to Tanaka.

The story about their struggle to grow has been promoted under a meticulous plan mapped out by Park Jin-young, or J.Y. Park, founder of JYP Entertainment.

The teenage members just keep trying to get better as they are inspired and encouraged by Park’s words. “You have skills but need to express your personality more clearly,” he says. “It is more important for you to have one special strong point than to have no weak point.” Their moving story of going through thick and thin to realize their collective dream has captured the imagination of fans.

For NiziU, Sony Music Entertainment has adopted the talent development method that has produced many K-pop stars, some of whom have gained huge international popularity. 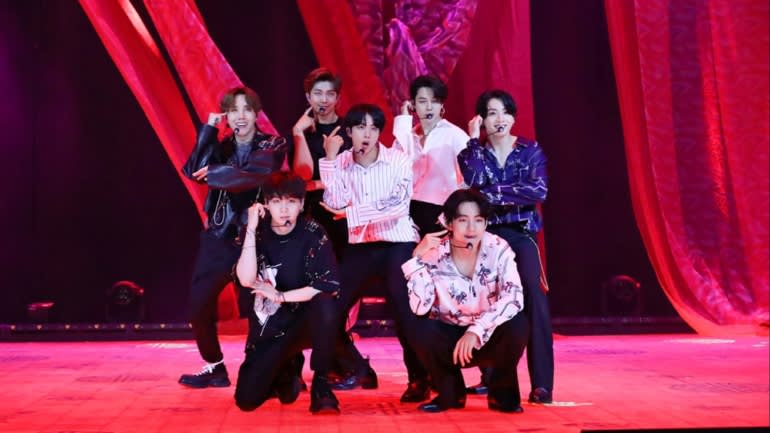 BTS during an online live show in June. The group has become a fixture in the Top 10 of the Billboard charts.

The biggest global pop sensation from South Korea is BTS, a seven-member boy band that debuted in 2013. BTS has become a fixture in the Top 10 of the Billboard charts. Its two-day online live concerts in October were watched by a total of 990,000 viewers in 191 countries and regions, ringing up nearly $50 million in fees.

Big Hit Entertainment, the management agency of BTS, made its stock market debut in South Korea in October. The company’s sales in 2019 soared 170% from the previous year to 587 billion won ($532 million). While its operating profit is around a modest 99 billion won, the newly listed stock surged on the first day, driving up the company’s market value to over 11 trillion won. Even though its capitalization fell to about 6.5 trillion won as of Dec. 3, the agency still dwarfs its South Korean and Japanese peers in market value. The high valuation reflects investors’ expectations for BTS, which earns most of the agency’s revenue.

BTS attracts fans not simply by singing and dancing well. While wowing a total of 2 million in a 23-city world tour, BTS also offered fans behind-the-scenes glimpses into members’ daily lives and training and production sessions. Their willingness to show themselves as they really are has helped them build strong emotional ties with fans. The members regularly use social media to communicate their thoughts and feelings, including anger and frustration, as a way to strike a sympathetic chord in the hearts of fans. 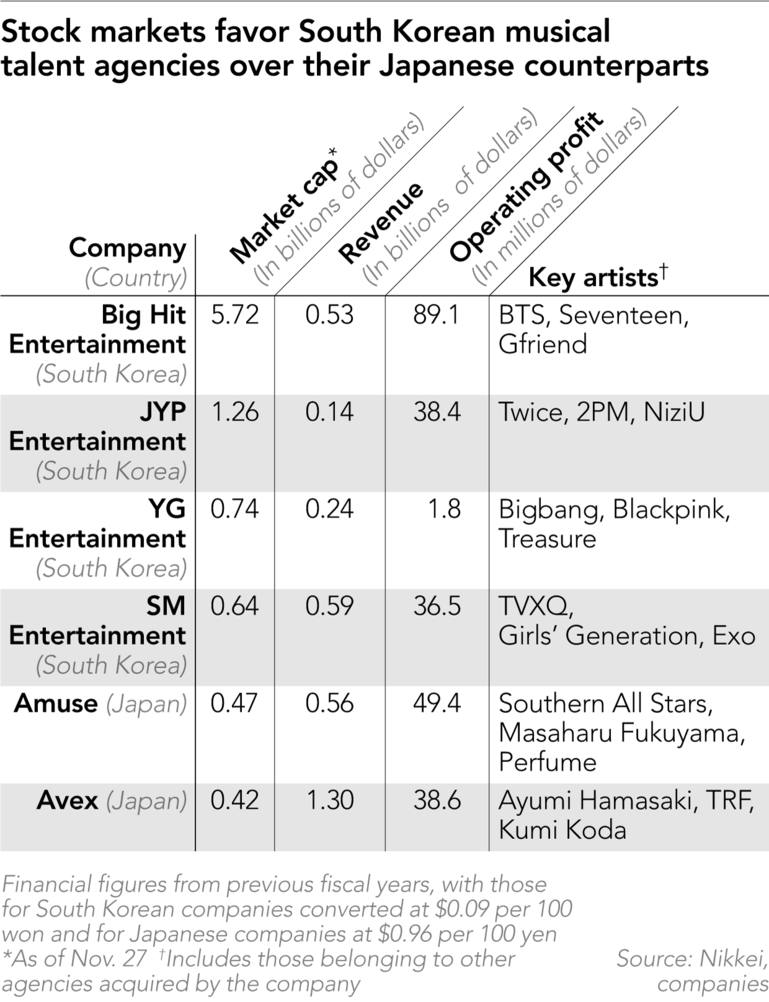 Their key tool for connecting with fans is Weverse, a web service developed by Big Hit Entertainment by fusing the functions of Twitter, Instagram and YouTube into an integrated and dedicated channel for communication with fans. The BTS service, which can be used in 10 languages, had 8 million subscribers as of Nov. 27.

Park Yong-hee, an analyst at IBK Investment & Securities, says Big Hit is no longer a simple talent agency. He defines it as “a platform business based on Weverse.” The company will use the money it has raised through its initial public offering to enhance its customer services, Park predicts. He lauds the firm’s system for securing recurring fees as a stable revenue source.

Big Hit Entertainment and JYP Entertainment are two of the four South Korean talent development and management agencies. All have similar systems to develop stars in which they accept promising idol wannabes as “trainees,” groom them for several years and help them make their debuts.

During their training periods, these wannabes take lessons not only in dancing and singing but also in such foreign languages as English, Japanese and Chinese.

Once a group is set for its debut, all the members live together to strengthen their sense of unity and solidarity. Typically, an agency invests about $100,000 in each trainee. Developing a single idol group can cost millions of dollars. The costs are shouldered by the agency, which can earn a hefty payoff if a trainee grows into a big star.

Lee Jangwoo, a professor at Kyungpook National University who is well-versed in the history of how K-pop has won global popularity, said the founders of these talent agencies invented and developed systems for the “mass production of idols.” Their core competency is management know-how to ensure a steady stream of idols making their debuts, according to Lee.

Harvard Business Review analyzed K-pop’s global success in a case study published in June 2020. The study points out an established formula for guiding idols to success. This analysis will be used as a case study for the university’s MBA program, starting in 2021. The South Korean talent management companies also have clear long-term strategies for global expansion. JYP Entertainment, for instance, has a three-stage strategy for expanding its presence across the globe.

In the first stage, the company managed groups composed mostly of South Korean members, like 2PM. In the second stage, it engineered the success of some multinational groups like Twice, which has South Korean, Japanese and Taiwanese members. NiziU embodies the third stage, which focuses more on groups consisting of only non-Korean members targeted at overseas markets.

Much as consumer goods makers concentrate their management resources on the development of new products, these South Korean talent management agencies make heavy investments in the discovery and development of the next generation of stars.

Already, some new K-pop groups described as the “next BTS” are gaining popularity around the world, including Blackpink and SuperM. The K-pop idol production machine is clearly on a roll.