Christine Schraner Burgener welcomed the fact that the Council was meeting behind closed doors on Friday to discuss the rising death toll on the streets as daily protests continue but told Ambassadors that “your unity is needed more than ever on Myanmar”.

Power to veto any Security Council statements or resolutions, rests with the five Permanent Members, China, France, Russia, the United Kingdom, and the United States.

The Special Envoy said she had been in close contact with people across various communities since the 1 February military takeover, noting that “they, including committed civil servants, are the real heroes and protectors of the nation’s democratic progress.”

But, she added, “the hope they have placed in the United Nations and its membership is waning and I have heard directly the desperate pleas – from mothers, students and the elderly. I receive every day around 2,000 messages, for international action to reverse a clear assault on the will of the people of Myanmar and democratic principles.”

She urged the Council to push further to end the violence, and restore democratic institutions, denouncing the actions by the military, “which continues to severely undermine the principles of this Organization and ignores our clear signals to uphold them.” 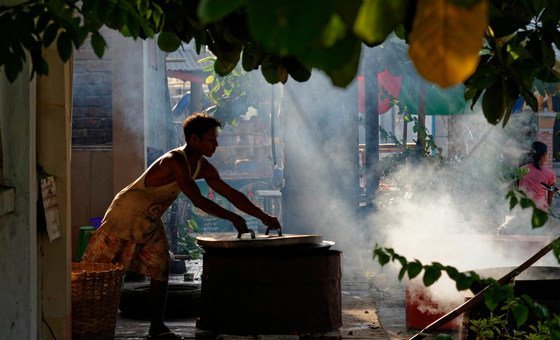 The envoy noted that around 50 “innocent and peaceful” protesters had now been killed, with scores more injured, with evidence mounting of killings and maiming by military snipers, in contravention of international human rights law.

As of 2 March, she said the UN human rights office OHCHR was reporting that around 1,000 are either detained or unaccounted for, having been arbitrarily taken from the streets.

“The Secretary-General, who remains closely engaged, continues to speak out and has strongly condemned the violent crackdown”, she said, adding: “The repression must stop.”

Be ‘resolute and coherent’

“It is critical that this Council is resolute and coherent in putting the security forces on notice and standing with the people of Myanmar firmly, in support of the clear November election results” she said, which overwhelmingly returned the party of jailed leader Aung San Suu Kyi to power.

She praised the stand taken by Myanmar’s ambassador to the UN, Kyaw Moe Tun, who a week ago publicly sided with the protesters against the coup, and has remained in post, despite the efforts of the Burmese military to remove him. He “needs your full support”, she told the Council.

Ms. Schraner Burgener said she had continued to communicate the UN’s “strong dismay and condemnation” for its failure to protect the Burmese people, and said she would continue to engage, with all actors during the crisis.

She declared that “there is an urgency for collective action. How much more can we allow the Myanmar military to get away with?”

Besides the violence and oppression, the Special Envoy told ambassadors that the country’s expanded immunization programme against the march of COVID-19, together with other routine immunizations, “have essentially stopped functioning since early February.”

There is an urgency for collective action. How much more can we allow the Myanmar military to get away with? – UN Special Envoy for Myanmar

“This is likely to build up rapidly into increased risks for multiple health emergencies”, she warned.

And the economic growth and integration of the past decade was also at immediate risk, she said. “The ongoing crisis adversely affects the workers, producers, business owners, domestic and international investors, in an unprecedented manner.

“People are rushing to the ATMs to withdraw their savings for an imminent fear of a banking collapse…International remittances have also been held up and the bank accounts of a number of UN agencies are frozen”, she added.

Humanitarian needs remain acute, she said, “with more than one million people in need, with many of those living in areas currently or previously subject to conflict with the military, like Rakhine.”

In conclusion, the Special Envoy reminded ambassadors that “it is our collective obligation to defend the defenceless. In support of the Secretary-General’s leadership, I will continue my efforts in solidarity with the people of Myanmar. Their hope, will depend on unified support and action from the Council.”